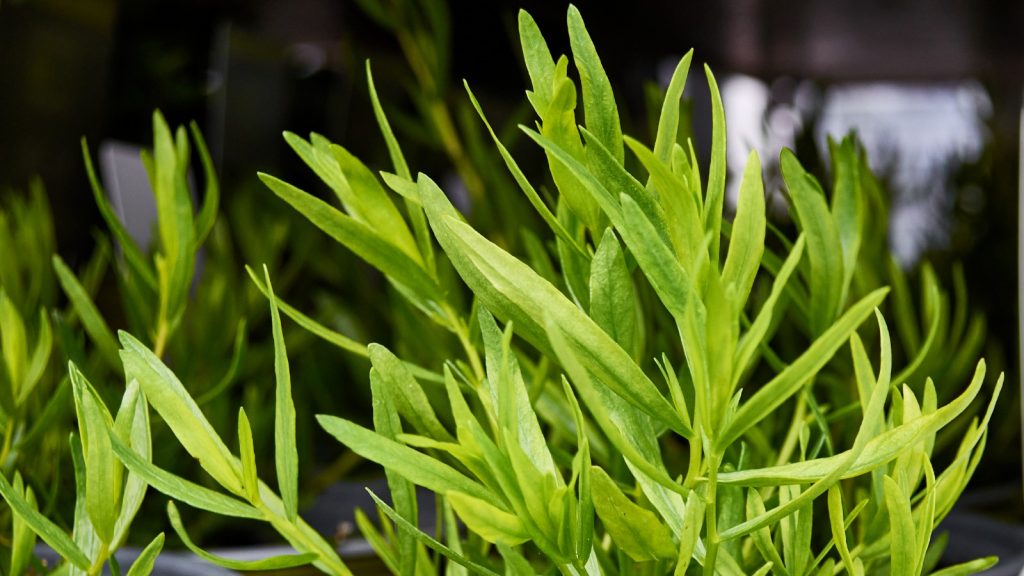 Tarragon, the versatile herb with numerous applications in the kitchen.
The Tarragon cultivated by RB Plant in Albenga as a part of its Sunny heRBs range comes in three varieties: Siberian, Mexican and French.
Find out more about Tarragon in pour news

Tarragon is a highly versatile culinary herb grown by RB Plant as a part of the Sunny heRBs range of high-quality herbs, 100% made in Albenga.
This perennial plant from the Asteraceae family originates in Russia and Siberia. Tarragon is also known as estragon, serpentaria, dragon and tragone.
The herb is characterized by its bright green, thin, glossy leaves and small greenish-yellow flowers.
There are three varieties of Tarragon: Siberian or Russian Tarragon, Mexican Tarragon and French Tarragon.

This is a highly resistant variety of Tarragon.
Its unique flavour, a cross between salt and pepper, makes it ideal as a substitute for salt in controlled sodium diets.

This plant originates in Mexico and Central America.
The scent given off by burning Mexican Tarragon leaves is particularly unpleasant to mosquitoes and this explains its use as an incense to repel these annoying insects.

A perennial herb originating in Central Asia, French Tarragon produces small dark coloured fruit and light-green leaves that are the aromatic element of the plant, providing a pleasant fresh and tangy flavour.

In the kitchen, Tarragon is used  to add flavour to a variety of dishes thanks to its characteristic slightly spicy taste.
Tarragon is a key component in French cuisine, whilst in Italy it is widely used in Tuscany.
The most broadly recognised recipe that makes use of Tarragon is the Béarnaise Sauce. This sauce is principally used to accompany meat dishes such as those typical to Tuscany.
Tarragon can be used both fresh and dried.
Fresh Tarragon has an intense flavour that is slightly reduced once dried.
This herb has numerous applications combined with fish, seafood, eggs, omelettes, roasts, cheeses, vegetables and salads.

Tarragon is also the ideal addition to:

In ancient times Tarragon was known as dragon grass as it was associated with magical powers to fight off dragons. It was also renowned as a cure for bites from poisonous animals such as snakes