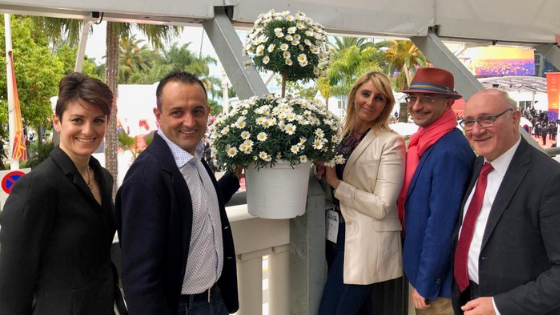 RB Plant from Albenga at the Cannes Festival

RB Plant flowers and herbs take centre stage at the event organised by GLFC as part of the Cannes Film Festival.

On the 17th March 2019, herbs and flowers from Albenga’s RB Plant accompanied the Genova Liguria Film Commission at the Cannes Film Festival.
For the occasion, GLFC presented its event “1999-2019 – Locations, Services and the New Regional Fund”.

Flowers and herbs from Albenga’s RB Plant on display in the Italy pavilion at the Hotel Barrière Le Majestic during the Cannes Film Festival.

This special edition of the event was held in the Italy pavilion of the Hotel Barrière Le Majestic in Cannes and the hotel’s hall and terrace were purposely decorated with daisies and herbs from Albenga provided by the RB Plant Consortium.
In addition, the guests present at the event payed tribute to our aromatic herbs, both our Sunny Herbs and a mix of certified herbs.

Our representatives in the pavilion, Marco Cappello and Chiara Boasso, confirm the success of the initiative and the enormous interest and appreciation for our plants demonstrated by the guests.

A window on Liguria at the Cannes Festival

The GLFC event, attended by President Cristina Bolla, was dedicated to the promotion of Liguria, the funding notice intended for audio-visual projects, Liguria’s locations and its artisan and eno-gastronomic products.

The event witnessed the presentation of a teaser for the television series “In viaggio con la figlia” (travels with my daughter) directed by Giorgio Molteni, produced by the Ligurian Artisan Confederation together with the Genova Liguria Film Commission with the support of the Ligurian Region. The director Giorgio Molteni, the screenwriter Raffaella Verga and the actors Cristiana Manzi Dell’Aira e Renzo Sinacori were all present.

Andrea Rocco, director of the Ligurian foundation, spoke about the funding notice, aimed at helping companies and audio-visual projects filmed in Liguria, which will be open from 30th May to 28th June. Another topic of discussion was the Digital Fiction Festival that has been added to the calendar of events dedicated to the Genova Liguria Film Commission’s twenty-year anniversary and scheduled to run from 1st to 4th August 2019 at the Castel Franco in Finale Ligure.